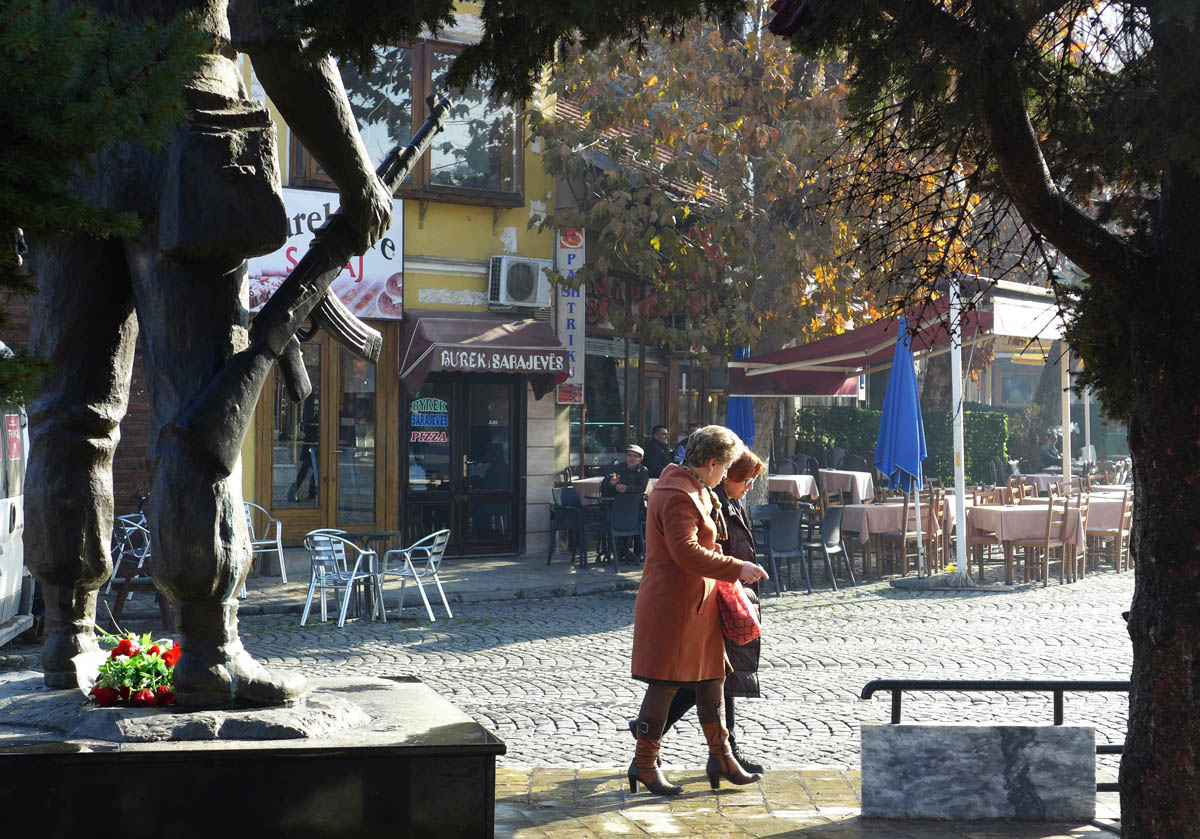 I’m drinking beer in the Hotel Partizan, Bresoviča with ‘Radio Ilir’ on full power.  He’s telling me ‘briefly’ about post-war Albanian history.  Fortunately I’m very interested.  Whether it was explaining the iconostasis in the Cathedral of Saint Clement of Ohrid, Skopje, the Roman amphitheatre in Dürres or the story behind the Chinese MiG’s, Ilir knew what’s worth knowing.  One of my very favourite Ilir talks was ‘How to live under a dictatorship with dignity AND keep your sanity’.

It was just as well that we had Ilir with us as this road trip scored ‘nul points’ for skiing.  The weather was atrocious.  After our day and a half on brick hard ice in a gale at Bresoviča we drove off, Ilir and I in front, an Albanian and a Scot speaking French in Kosovo. Through Serbian villages flying Serb flags, occasional Turkish villages with Turkish flags and with Albanian flags flying everywhere else we at last saw the flag of Kosovo at the border with Macedonia.  Are these flags a sign of increased tolerance or a provocation?  Both I expect.

We can all get hurt skiing.  Each time a group gets down safely with everyone in one piece at the end of a trip, I’m thankful that nobody hurt themselves.

During this week I was preoccupied by my 14-year-old daughter breaking her leg in ski training; a spiral fracture of the tibia resulting in plates and 12 screws.  That wasn’t the end of it as she caught a bacterial infection in hospital. She had to return there for three more weeks on intravenous antibiotics strong enough for a horse.

Other than for my daughter, all had gone well during the week.  Back at the road in Vallorcine at the end of the last day I skied up to the aspirant guide and the group who were shaking hands.  They turned and started thanking me when over my shoulder I heard the horrible sound of body and skis crashing on to something hard.  Bill hadn’t spotted that he had skied onto a garage roof. Travelling too fast, he was then unable to stop before the drop; thankfully only three feet but onto a hard surface cleared of snow.  Instead of beer and peanuts I was off to A&E.  Thankfully no damage done.