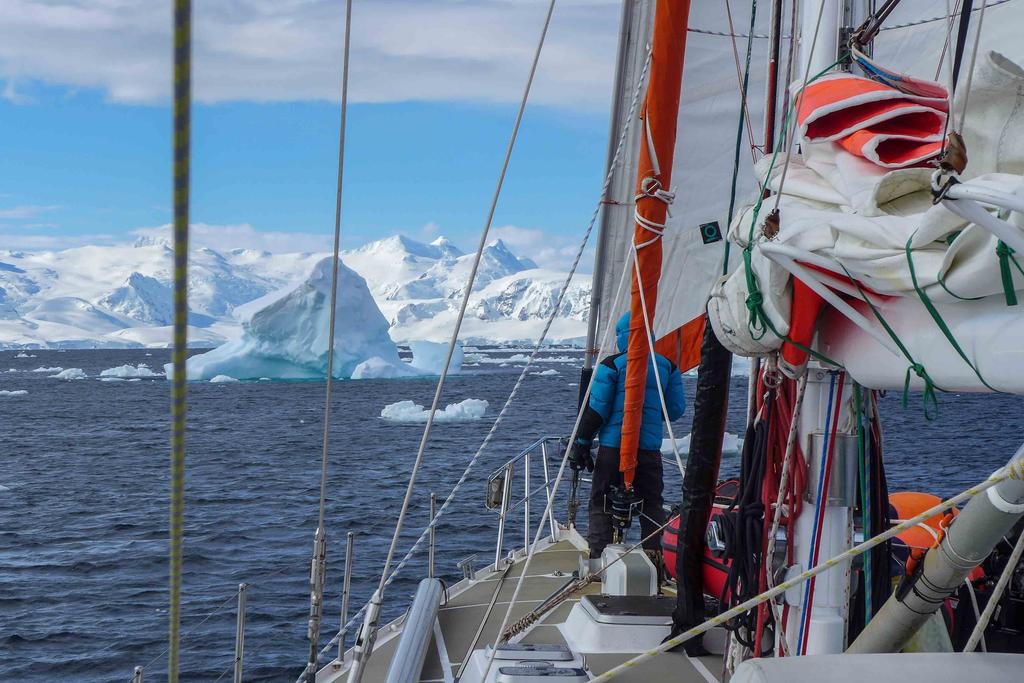 The December 2015 Podorange team came from four nations and English and French were spoken if not always understood! Kindness and good humour shone through and everyone worked well together during our month on board. We encountered rather poor weather and ice choked seas the latter which prevented all vessels from heading south of Cuverville Island. That’s pretty far north!

We enjoyed fine skiing on un-named summits around Cierva Cove followed by the Antarctica ‘classics’ Igloo Hill, Mt Tennant, and on an almost blue sky day where some warmth from the sun was felt, Mt Harris. Relaxing after skiing we were entertained by humpback whales feeding very close in to shore.

I’d been to have a look at the south end of Brabant Island in 2011 but then the shore was ice bound. From the summit of Mt Tennant, Chiriguano Bay looked pretty much ice free and the Solvay Mountains as enticing as ever so we took our chance. The following day was the only perfect day of weather we had and we made the very best of it by ascending an un-named 1343m peak between Mount’s Ehrlich and Cook which we called Nevis Australis or Mt Jenner, lying as it does at the head of the Jenner Glacier. I don’t think it was one of the many summits climbed for the first time during the 1984/85 British Joint Services expedition to Brabant. The other mountain we enjoyed was the small 450m peak to the east of the bay, named Mt Cherry by the first ascensionists in 1985. We had set off for greater things but, as is often the case in Antarctica, we had to amend our plans due to the wind and weather.

Brabant Island’s highest peak, the impressive 2520m Mt Parry was also first climbed by the British services team in 1984. From a camp at 800m we had a magical time on what was probably the 6th ascent. The day started with little cause for optimism but we kept going and were in exactly the right place for the brief weather window that allowed us to summit. The ski down was superb and all in all this day was the highlight of our trip.

Our plans for one final night moored in the lee of Two Hummock Island were thwarted by 45knot southerly winds which pushed us north at 10 knots. No shelter was to be had so there was no farewell dinner or official round-up. Next stop was Cape Horn.

As Brice the skipper so truly said ‘we are only tolerated in Antarctica; nothing more’. We’d had our fun and it was time to go.